Most of the time, he is so engrossed in the particulars of some pleasant podcast, that his surroundings fade into a peripheral blur.

He notices “almost nothing,” he tells me, leaning forward and whispering, lounging on a swank countryside patio just outside of Reykjavík.

A few weeks ago, however, succumbing to his wife’s (a yoga practitioner) incessant badgering, Mr. X “stooped to a state of mindfulness,” and found himself—for possibly the very first time—observing his environment: admiring the desiccated bird droppings, breathing in the delightful fragrance of passing bums, listening to the sound of municipal pressure cleaners, “obliterating yesterday’s vomit from today’s streets” (Mr. X is eloquent in a sardonic way).

What began as a mediocre experience, he tells me, punctuated by “something approaching the neighborhood of ruminant thoughtlessness,” was transformed, after those first few steps, into something entirely different.

“A quiet act of revolution,” he declares, in a small voice, grinning.

Mr. X’s wife, however, peeved by his cerebral tendencies, maintains that he has totally missed the point of mindfulness. She is probably right.

It all began when Mr. X passed the fast food restaurant Bazilika Reykjavik on Austurstræti—formerly Kebabhúsið—and, glancing over at the window, sounded out the words to the ad on the window-pane: “Must Try.”

“Must Try—for WHOM?” he wondered, and began his parsing.

(Mr. X is a logician, who prefers to remain anonymous.)

“Must,” he tells me, “signifies that one is required or obliged to do something either by morality, law, or custom.” His own private morality, however—predicated on a complementary amalgam of Hegel, Kant, and Simone De Beauvoir—does not demand that he indulge in Bazilika’s pizzas, and neither does Icelandic law nor local custom, as far as he knows.

“It was then,” Mr. X says, “observing the prevalence of such sentiments, that I decided to take it upon myself to rewrite all of the various false or misleading advertisements decorating the many businesses between my home and my place of work—beginning with Bazilika.”

He has since begun to compile these revised advertisements on a soon-to-be-published website, and hopes to recruit others in his rebellion against “inexact” and “untruthful” language.

“With Trump and Útvarp Saga and the like: It’s as if were losing our ability to reason.”

Unfolding his laptop, Mr. X pulls up his revision of Bazilika’s “untenable dictum” (i.e. “Must Try”), which exists as a draft entry on Squarespace. It reads: 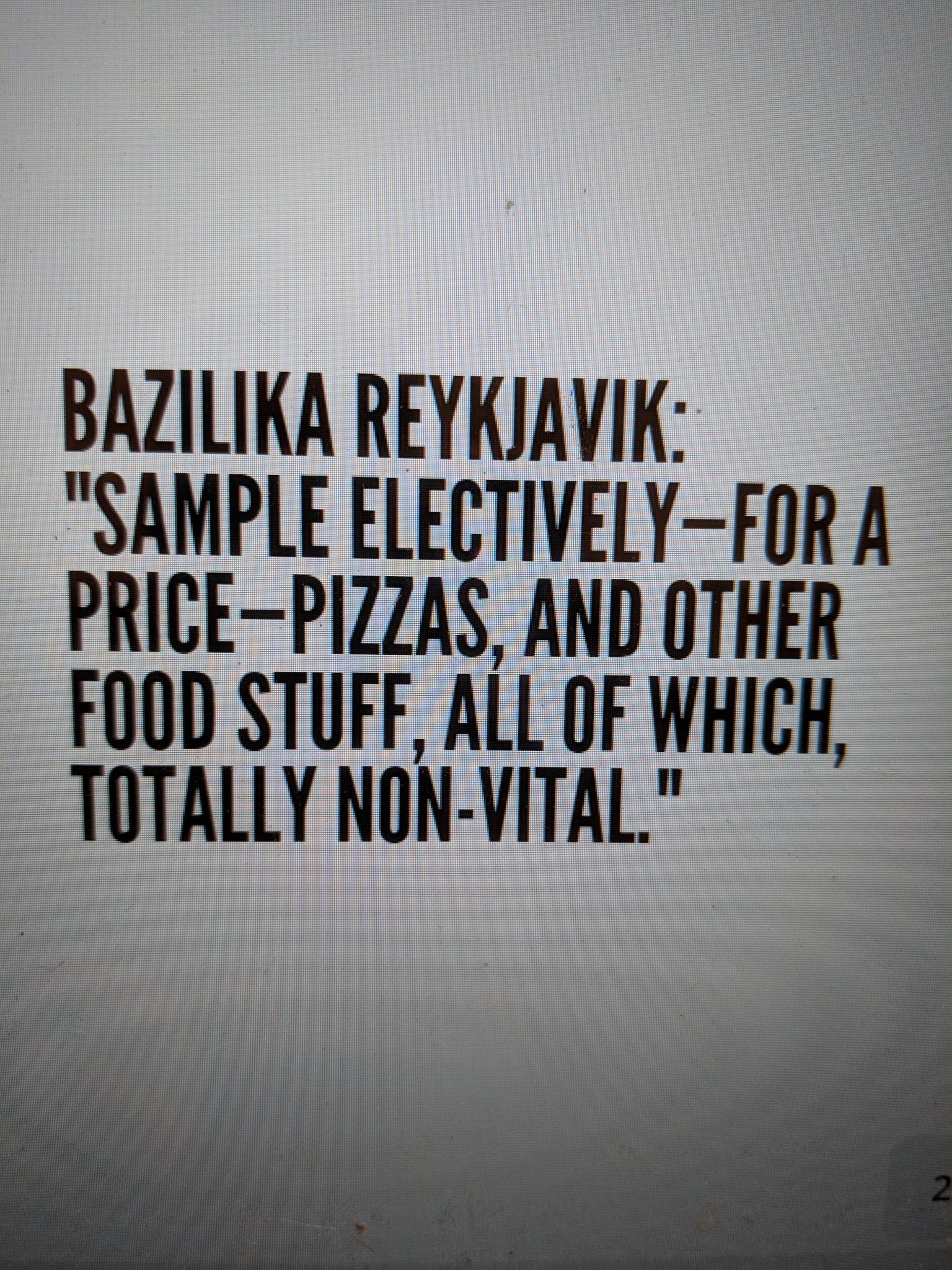 (Bazilika Reykjavik: “Sample Electively—for a Price—Pizzas, and Other Food Stuff, all of which, Totally Non-Vital.”)

He then proceeds to discuss other such amendments and their origins.

“A little further down Austurstræti,” he recalls, “I walked past 10/11 and noticed, there on the window, in white letters, the slogan, ‘Convenience Around the Clock.'”

“‘Convenience’ means something that is ‘suitable to one’s comfort, purposes, or needs,'” he says, “and, considering that I am a wage laborer subsisting on a relatively slender budget, who furthermore aspires to live well into his ’90s, paying exorbitant prices for insalubrious snacks is not consistent with my definition of ‘convenient.'”

With this in mind, Mr. X, again, turning his laptop toward me, revealed another revision: 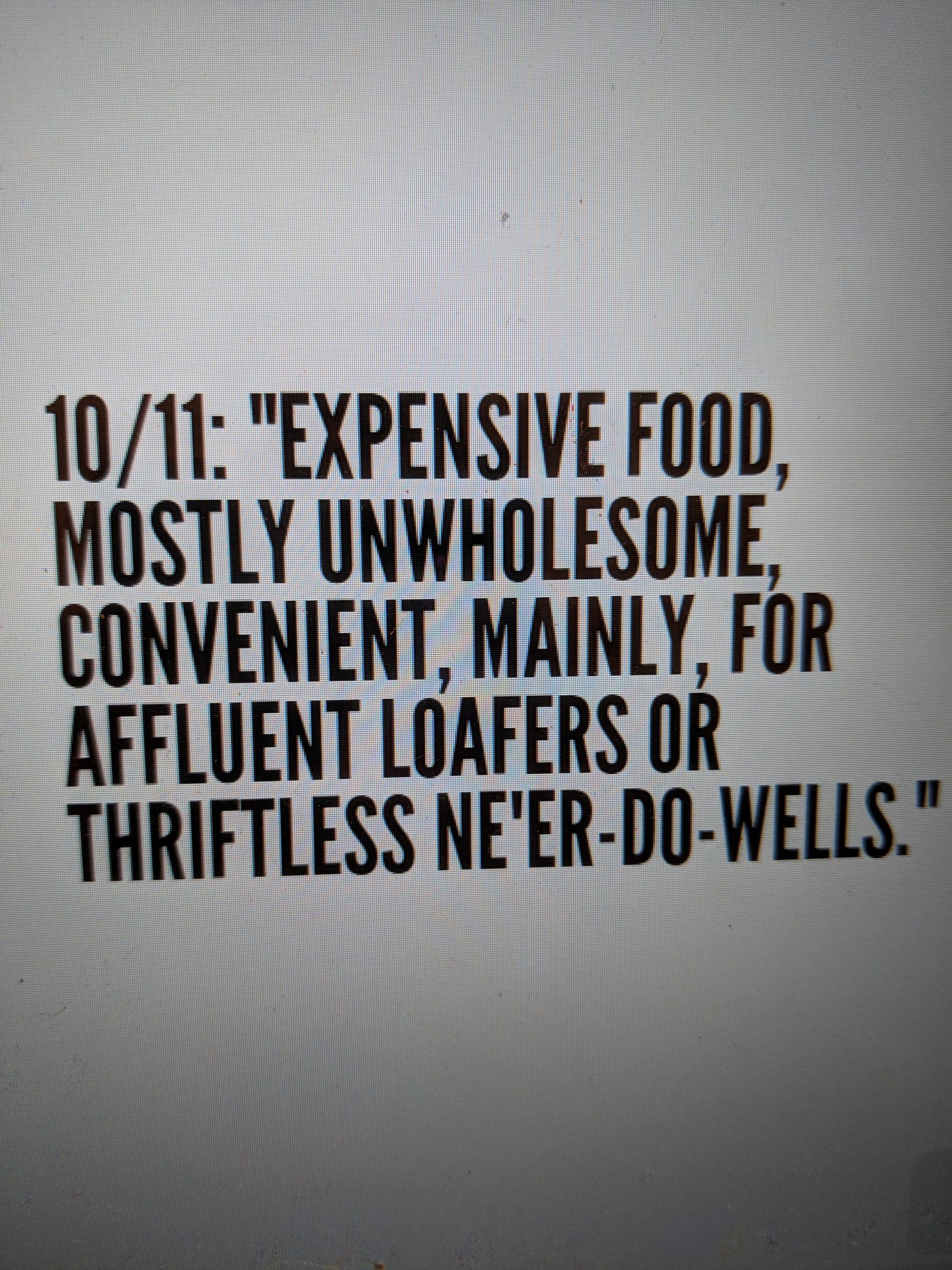 Then there’s Hressingarskálinn, a favorite of Mr. X.

“On the other side of the street from 10/11, I noticed the words ‘FREE BEER’ on Hressingarskálinn’s window, but, in a clever and unforeseeable twist, the word ‘wi-fi’ had been written directly underneath the word ‘FREE’ in diminutive letters, suggesting that it was, in fact, the wi-fi that was free—and not the beer.”

But this—because it conjured the image of some “green Bostonian smacking the heel of his palm against his forehead, in jocose self-recrimination”—did not bother Mr. X nearly as much as another message on Hressingarskálinn’s window:

“You came all this way to Iceland for an ice cold Coca Cola. We know. We know.” 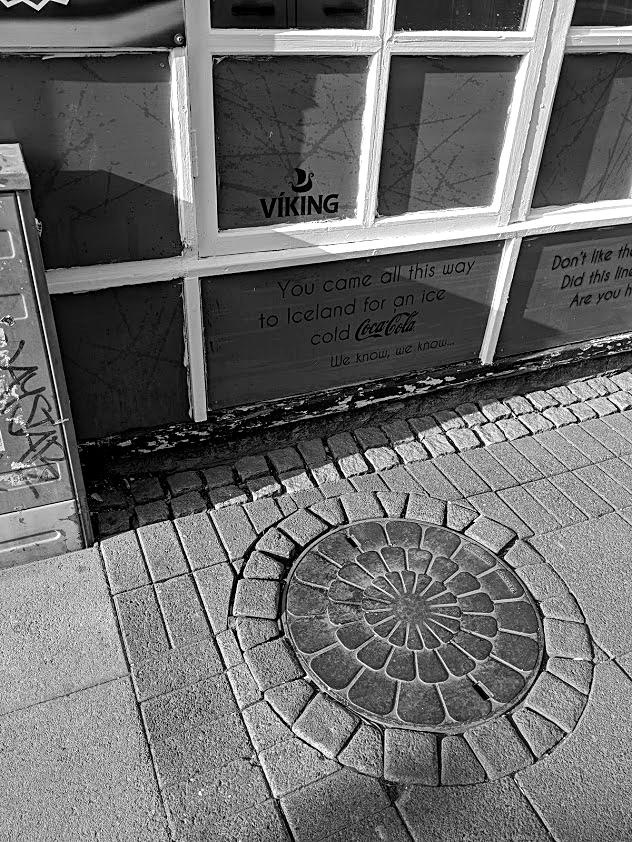 This seemed to Mr. X a rather sinister play on late-stage surveillance capitalism.

“It was like Hressingarskálinn wanted travelers to know that it, in cahoots with Big Brother, knew that it was not the novelty of foreign lands that they were seeking—not the authenticity of local cuisine—but merely the comfort of knowing that all of their favorite brands had colonized even the northernmost capital of the world. ‘We have Coke here. It’s okay.'”

“A ‘warning’ is ‘a statement telling of, or an indication providing evidence of, impending danger, difficulty, or misfortune,'” he says. “Finally, I thought, some honesty.” 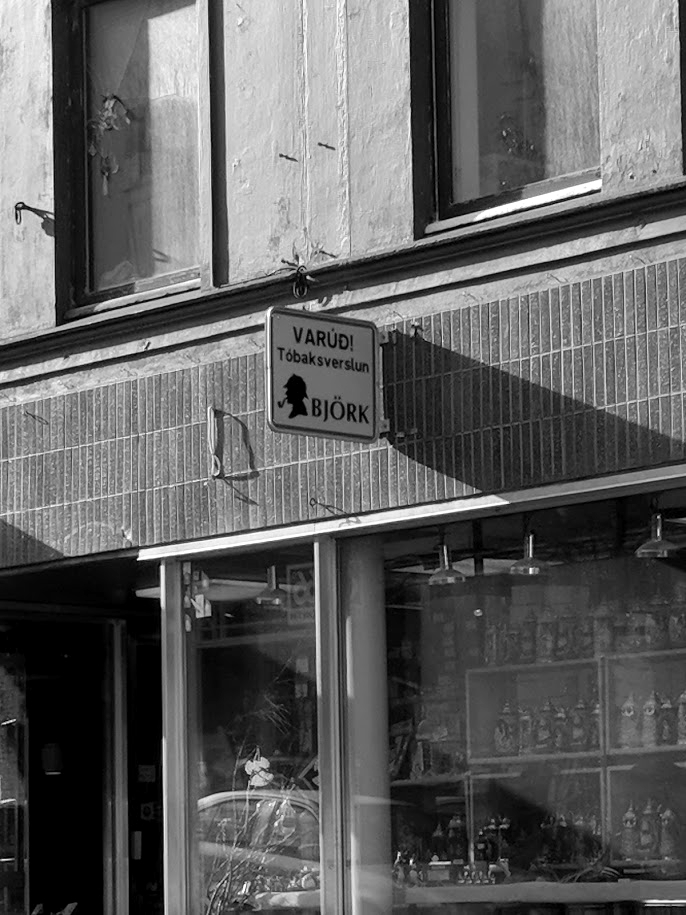 During the final leg of his journey, Mr. X says that he came across hamburger hyperbole: “Offer of the Century” (Búllan); a strange appeal to standardization: “Icelandic Charms that Fit International Bracelets” (GÞ); a seemingly unwitting oxymoron: “Come In & Be Inspired by Icelandic Nature” (Inspired by Iceland); broken promises: “Always There For You” (Vikivaki); and— his personal favorite—a rhetorical question placed next to a woman wearing a teal t-shirt with the island of Iceland across the chest: “Why pay more?”

“Are you telling me that there are other teal t-shirts with our island on the front that cost more?” Mr. X says,  sounding a little like a logician Larry David.

As I quietly muse upon all these revisions, something occurs to me:

“It strikes me that ad copy may, in fact, be a kind of proxy for the ills of capitalism, in the mind of Mr. X. Is it really Capitalism that you’re against?”

“No, quite the contrary. I have nothing against capitalism. I believe—and this has alienated me from many of my leftist friends—that a political or economic system is only as good as its human constituents. If human beings were moral, if they were united by some sense of shared purpose, capitalism would do just fine.”

Before I take my leave, Mr. X tells me about a poster for a visual arts exhibition that he saw just before that first rebellious tramp concluded.

“The poster was promoting an exhibition entitled In Accordance with the Deceased’s Personality, and it was a reference to a piece of copy for a Reykjavík Funeral Parlor.”

“There are other people out there, besides me.”

(Please Note: The above “article” is a work of fiction, partially grounded in reality.)