What Spotify’s “Iceland Top 50” Says about Us, the Icelandic People 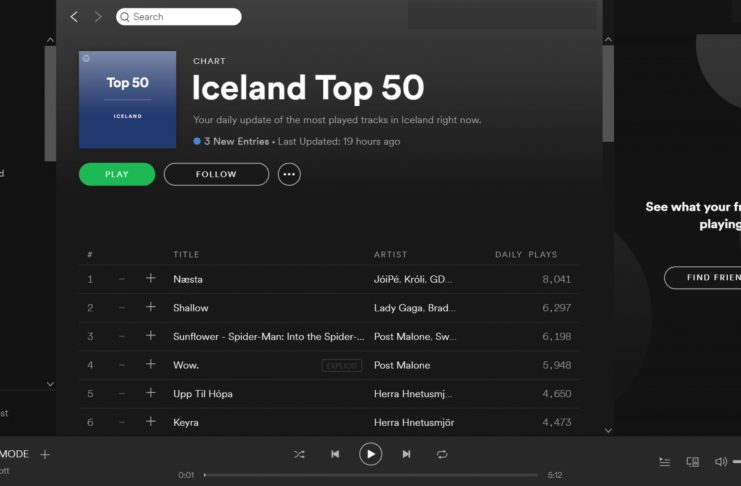 In the early 18th century, German polymath Gottfried Leibniz, in his book The Monadology (1714), claimed that we lived in “the best of all possible worlds.”

As one cannot mention Leibniz without Voltaire, well … Voltaire—who often functions, in this regard, as a stand-in for the average no-nonsense realist—disagreed with Leibniz:

This was not the best of all possible worlds.

While Leibniz is credited with authoring the concept of possible worlds—employing it as an intuition pump—American philosopher David Lewis went a step further than his now defunct German colleague by claiming that this was no mere abstraction:

This means, according to a recent interview with English philosopher Helen Beebee (on the Philosophy Bites podcast), that there is actually a world in which the English national football team has won every single World Cup.

I’ve been fascinated by Lewis’ version of possible worlds ever since, making a quiet hobby of envisioning strange but internally-consistent worlds (the latter being, as I understand it, among the only conditions for the existence of these worlds) during my coffee breaks.

Following Lewis’ logic, there is actually a world in which Spotify’s “Iceland Top 50” chart is inhabited solely by the music of Bone Thugs ‘N’ Harmony (whom I used to love, and still, somewhat, admire: mostly the old stuff). In that world, perhaps, the Icelanders rallied together to save the haggard hooligans from dire financial straits (they’ve invested their money rather poorly, I understand), by agreeing to play their songs on repeat, thereby “donating” a portion of their subscription fee to the band (I’m surprised that this isn’t a more popular way of raising funds for the needy; whenever some pitiable person suffers a terrible tragedy, pair him with a Swedish super-producer for a double album [could be just noise]—and let the good people of the world play the poor wretch’s album on repeat, while they attend to other things).

But that isn’t this world.

The “Iceland Top 50” chart that exists in this world is similar to the “Sweden Top 50” chart, with the exception that all of the Icelandic songs have been swapped for Swedish songs (mostly).

Lately, I’ve pondered what the “Iceland Top 50” chart says about this world, the one we find ourselves inhabiting, and, by extension—what is says about us, the Icelanders.

“Tug at one thing in the universe and you will find that it is connected to everything else.”

It’s evident, according to the “Iceland Top 50” chart that in this world …

1. We like young people better than old people*. Not counting the living members of Queen, Gigi D’Agostino is by far the oldest artist on the “Iceland Top 50” chart—and he’s 51, which is hardly geriatric (the average artist on the list, according to the underwritten’s rather haphazard calculations, is in his or hers late 20s).

3. We prefer short songs to long ones. Bohemian Rhapsody by Queen is the longest song on the list—but it was written in 1974, which may explain the discrepancy (the average song length on the list is around three minutes and ten seconds, which is about the duration of a long commercial break).

4. We prefer Icelanders to Americans, and Americans to Brits (21 songs on the list are Icelandic). We don’t mind Lithuanians (Dynoro), so long as they’re accompanied by Italians (Gigi D’Agostino), and the French are sometimes okay (Gesaffelstein) if their in cahoots with the Canadians (The Weeknd).

5. We like fast songs. The average tempo of the songs on the chart is around 117 beats per minute (the limit for how fast one’s heart should beat during exercise if one is in one’s 60s).

6. We favor individuals over bands. Not counting duos—JóiPé x Króli, Ra:tio, etc.—Queen and Panic! at the Disco are the only two bands on the chart.

7. We like songs about love, partying, and consumer products.

Where does this leave us?

The ideal artist, as favored by the average Icelandic listener, is a young Icelandic male who writes short and upbeat songs about love, partying and consumer products (essentially, Herra Hnetusmjör).

What does this say about this world?

Perhaps this: We are randy, materialistic patriots who value youth, testosterone, brevity, and individualism.

Admittedly, that sounds about right.

*The underwritten only considered the artists credited as artists, not producers. He would also like to stress the fact that this article is by no means a scientific endeavor, based on carefully analyzed data.