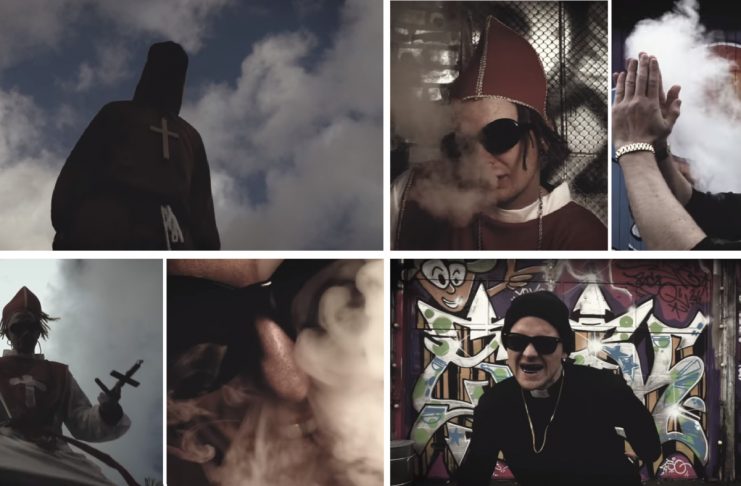 Medium dreads jutting out from underneath his regal miter, dressed in full papal regalia – complete with faux scapular and cowl – the inimitable Elli Grill is nothing short of, well, inimitable in his latest video to the song “Dr. Muller,” which offers a welcome relief from trite references to clothing brands and drugs du jour. Shot and edited by Marcin Gasienica and Morten Dall, “Dr. Muller” was released December 31st, 2017.

Like if a fluent Riff-Raff, having wheedled DJ Muggs into the production of Trap beats – began penning sci-fi. Something out of an Anthony Burgess novel, perhaps (not that we would know). Catamites and archbishops.

Who is Elli Grill?

An artist named after a sandwich grill; during his salad days as an adolescent skateboarder, Elli would frequent Ingólfstorg Plaza in Reykjavík for long hours, often bringing a sandwich grill with him in case he became ravenous (“to grill” in Icelandic can also mean “to take the piss out of someone”). He is also a founding member of the art collective Shades of Reykjavík .

What of the lyrics?

Where can I listen to the song itself?

The song is on Elli Grill’s 2017 album Þykk Fitan Vol. 5, available on Spotify.

What else do you recommend by Elli Grill?

His peerless freestyle on Kronik Radio.