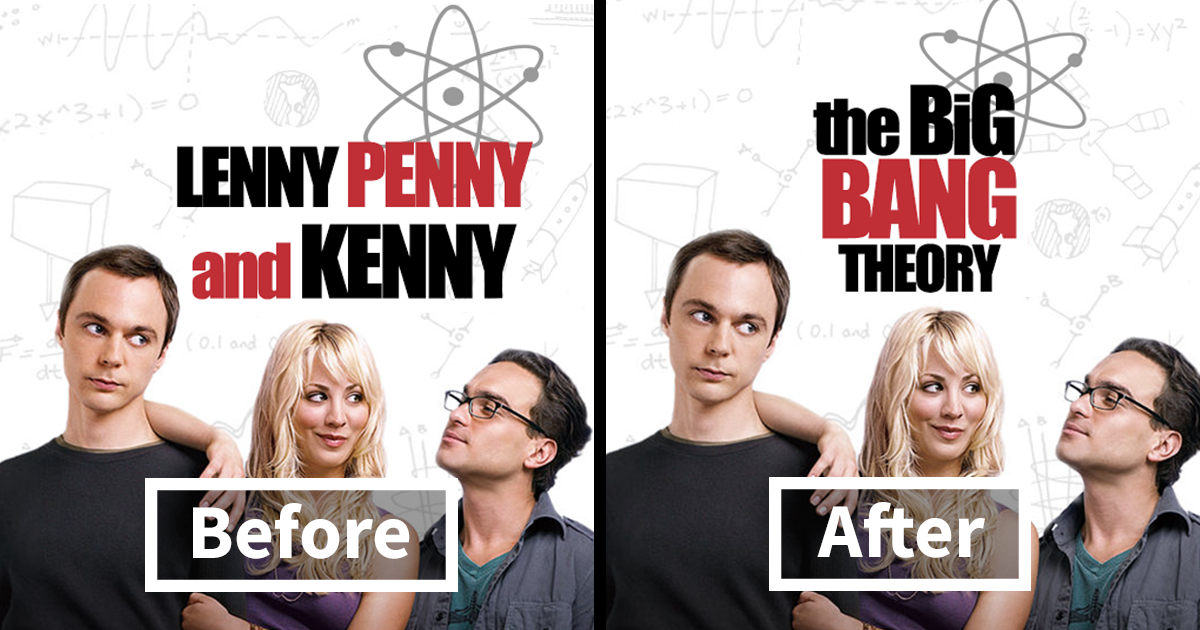 One of the weirdest original names belongs to Google, which, believe it or not, was supposed to be named ‘Backrub.’ Imagine Backrubing something instead of Googling? Sounds ridiculous, right? Well back in 1996 this was the original company name but was then changed to Google in 1997. This one definitely turned out way better than it could have been. Before renaming Jim Parsons’ character to Sheldon, his name was Kenny and the famous tv series was called not ‘The Big Bang Theory’ but ‘Lenny, Penny and Kenny’, which is the cheesiest thing in the entire universe. Oh man, the things we would do to have the famous trio called not the Powerpuff Girls, but the Whoopass Girls… It just sounds so badass. Well, according to the book “America Toons In: A History of Television Animation” that’s exactly how the girls were supposed to be named. Unfortunately, the name was changed in order to avoid offending the intended audience, which is kids and their parents. Rowan Atkinson, the genius behind the iconic Mr. Bean character, actually came up with this persona when he was studying for his master’s degree at the University of Oxford. The name Mr. Bean came up only after the first program was released, and while pitching different names, one of the suggestions was Mr. Cauliflower. Sounds fun, but nothing would change the iconic Mr. Bean! The original name for Snapchat was actually Pictaboo until the creators received a letter from a photography book company with the same name. Pictaboo was then changed to Snapchat. But the name is not the only thing the company changed. To make the app more popular, one of the original creators of the app suggested it was best to advertise it as a sexting app. On the drafts from the press release, it stated: “Pictaboo lets you and your boyfriend send photos for peeks and not keeps!” In life, you never know how one tiny decision can change everything completely. So, back in 2012, Vanity Fair released an issue were they wrote down all the things that could have been completely different in the show ‘Friends’. For example, Courtney Cox initially read for the role of Rachel Green, but she chose to play Monica, and Monica’s character was supposed to be way darker, edgier and snarkier. But the most important part is the name, and if it wasn’t for Kauffman and Crane, we would be stuck with ‘Six of One’ which was the original name of the show.

#7 Spaceman From Pluto – Back To The Future

If it was up to the the head of Universal Pictures’ the movie ‘Back to the Future’ would have been named ‘Spaceman from Pluto.’ Why? Because according to Sid Sheinberg, “no successful movie ever had the word ‘future’ in it.” According to writer and producer Bob Gale “Every single person at Universal loved the title Back To The Future except for Sid. So we went to Steven and said, ‘Steven, what are we going to do? He means it. He really wants to change the title.’” Steven wrote a memo back to Sheinberg saying, „Dear Sid, thanks so much for your most humorous memo. We all really got a big laugh out of it.“ Steven knew that Sid was too proud to admit he’d meant it seriously. And that was the end of ‘Spaceman From Pluto.’ There is no cheesier name than ‘Smile’. Imagine a legendary, incredible, one-of-a-kind band and then call them ‘Smile’ – just terrible. So then, it’s hard to believe that such an outstanding band like Queen would call themselves nothing but a cliche positive name. Well, as it turns out, the name ‘Queen’ was given after the band invited Freddie Mercury to join then, and he was the one who suggested this name (of course he was). In an interview with Circus, Mercury said that the concept behind the name was to be regal and majestic, just like the Queen.” Before they created the song that everyone sings on September 30th, they were ‘Sweet Children’, a band created when Billie Joe Armstrong was only 14 years old. The band changed their name to Green Day after being confused with Californian rock outfit Sweet Baby. Also, Sweet Children doesn’t sound so badass compared to ‘Green Day’, a name that refers to a day when all you do is smoke marijuana. We’re almost certain that Yahoo wouldn’t be so successful if they had kept their original name – Jerry and David’s Guide to the World Wide Web, it just seems a bit … too long. Of course, you could call it JDGWWW, but we think they did the right thing here by changing their name to Yahoo! Which stands for “Yet Another Hierarchical Officious Oracle.” Well this one is particularly odd… Hannah Montana, the protagonist of one of the most famous kids T.V shows of all time, was supposed to be Alexis Texas, which not only sounds weird, but is also a name of an adult film star. So, without anything else left to do the creators had to change the name to Hannah Montana.

#12 Not The Cosby Show – Married With Children Sometimes you create something and you name it so its name represents your creation the best. Or, you can just say what it is not instead of what it is. For example, the cult tv series ‘Married With Children’ were definitely NOT ‘The Cosby Show’ since it is a different tv series and Married With Children is so anti-traditional. Luckily, the title was changed since having the name Cosby in your title wouldn’t be a very good idea. According to sources, if it wasn’t for Walt Disney’s wife, we now would call Mickey Mouse ‘Mortimer’. It is believed that his wife hated the name so much he changed it to Mickey Mouse. Back in 1923, Leo Gerstenzang, the founder of Q-tips, saw his wife putting cotton pads on toothpicks, so he came up with the idea of q-tips. According to the history of q-tips “1926 – The product was originally called Baby Gays and in 1926, the labels were changed to read Q-tips® Baby Gays. Later, the name Baby Gays was discarded and Q-tips® became the identifying mark for cotton swabs. The “Q” in Q-tips® stands for quality and the word “tips” describes the cotton swab at the end of the stick.” Who would have thought that until 1898 you couldn’t enjoy a cold Pepsi but only a Brad’s drink? And who is Brad? When creator Caleb Bradham invented Pepsi back in 1893, he named it after his surname but six years later he changed it. So in 1902 the Pepsi-Cola Company was born, due to increased demand for the drink. „Screaming abdabs“ is an old English saying that means ’to induce an attack of extreme anxiety or irritation in someone’. So back in the 60’s, when this iconic music band was only at the beginning of its incredible path to fame, four young students decided to form a band called ‘Screaming Abdabs.’ Who knew that many years later we would know this band as ‘Pink Floyd’ – one of the most iconic music bands of all time. Before the band settled on the name, they also considered such variations as The Pink Floyd Blues Sound, The Pink Floyd Sound, and The Tea Set. If it wasn’t for a quick name change you would be yelling ‘SpongeBoy Squarepants!’ at the beginning of every episode, but according to the creator of this famous cartoon Stephen Hillenbur it was not meant to be, due to copywrite infringment. “The original name was Spongeboy, but I couldn’t use that because it was copyrighted by a mop company. I eventually thought of SpongeBob, but he needed a last name. SquarePants came to mind.” While explaining the name Hermione, J.K. Rowling said that even though the name comes from a Shakespeare’s Winter’s Tale, the Hermione herself has very little relation to this character. Yet, the author did say that this name was chosen as it is something a pair of intellectual dentists would choose, to show how smart they are. But it is not the name that sparks the interest, it’s the last name since at first Hermione was supposed to be not Granger but Puckle. Imagine if one of your favorite movie trios was – Harry Potter, Ron Weasley, and Hermione Puckle. Maybe it doesn’t sound that bad? Comment what you think! Coldplay was originally known as Starfish. Some time ago Guy Berryman joined a group made up of Chris Martin and Jonny Buckland, it was then called Pectoralz, after Berryman joined them they changed their name to Starfish. Later, after the drummer Will Champion joined their group, they renamed themselves to Coldplay and released their debut EP ‘Safety’. In a reddit post ‘I am Fred Durst of LIMP BIZKIT…Ask Me Anything’ Fred Durst answered some questions from his fans. One answer in particular received a lot of attention, where the vocalist revealed that his band’s name was almost Blood Fart: “The name Limp Bizkit came out in a riff session when deciding what to call the band. I wanted it to have the same roll off of the tongue as Led Zeppelin, but be so odd that you would have a hard time forgetting it. I remember things like Gimp Disco, Split D**kslit, B**ch Piglet, and somehow…Blood Fart. Plus, we never really took our name or purpose very serious considering the chances of succeeding were slim to none at that point.”
Auglýsing